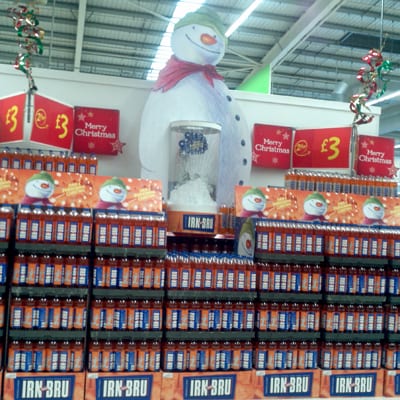 The Challenge The brief by the client (AG Barr Soft Drinks) was to create the focal point of a merchandise display for placement in the customer entrance of Asda and Tesco supermarkets, plus cash & carries and Tesco service stations, to communicate the message that IRN BRU “brings life to Christmas”. 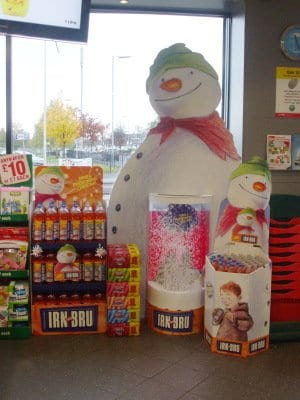 The Solution When interpreting the brief, Simpson Group took the approach of keeping established and future markets in mind. A discussion with AG Barr revealed they had secured the rights to use imagery from The Snowman animated film, and they wanted to maximise this media partnership in their POP advertising. The Snowman has become a Christmas institution for the generation who grew up with IRN BRU. This, along with separate seasonal promotions of the DVD and the airing of the film and its sequel (The Snowman and The Snowdog) on television over the Christmas period, was utilised to create a display which would target established AG Barr customers, fans of the film who were or were not AG Barr customers, plus a new market of future customers through the character’s appeal to children. The Result The result was an 8ft snowman cutout, using artwork based on The Snowman animation, with a large scale working snowstorm in its middle (which also helped to secure the cutout when standing up). The seasonal message of “Have a phenomenal Christmas” was positioned above a town scene with Christmas trees constructed from digitally cut display board within the snowstorm, and fake snow was circulated by a fan. The fan was one of the trickiest parts of the project to get right. It was required to be silent, so as not to effect the audio (described below) and had to be powerful enough to blow the snow around the PVC casing, yet not overly powerful – which would result in the snow being pushed to the top of the casing. The correct power settings were achieved through trial and error, and a wire mesh was introduced to the top of the casing to assist correct airflow and create a vortex which would circulate the snow realistically. To finish off the festive effect, the famous theme tune ‘Walking in the Air’ from the film itself was played alongside the snowstorm, grabbing the attention of shoppers even before they had seen the snowman itself. This was achieved by a motion activated sensor, which triggered the sound recording when shoppers walked in close enough proximity to the snowman. 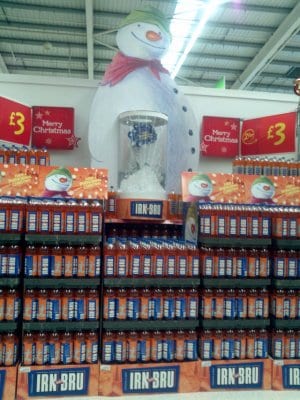 The display was produced in harmony with existing point of sale elements, including dump bins, FSDUs and smaller snowmen cutouts for shelf mounting, which could be positioned around the focal point of the 8ft snowman. This resulted in a harmonious and flexible solution for merchandising staff in the stores. The display achieved its marketing objectives of having high visibility and impact through its size (the main snowman was 8ft tall) and its physical placement in the stores, near the customer entrance. The musical element in particular brought the snowman alive and increased interaction with customers. It had the desired effect of creating excitement around the brand and getting customers involved. One of the Asda stores reported seeing parents taking photos of their children next to the musical snowman. With some supermarket staff also in costume during the Christmas period (elves, Santa hats, etc), the display increased the overall festive feeling within the stores. A distinct uplift in sales in the stores that placed a snowman display was reported by the client, and the reactions from stores were very positive. The display got customers talking about the brand from day one, and it was given premium location in Asda stores, where it was in the power aisle for six weeks.   As a depiction of the instant success of the display, it impressed Asda to the extent that the client doubled their original order quantity.

Sharon Clare of AG Barr’s Instore Visibility department says, “This piece of kit and presence was certainly a winner with all ages, and I am sure it will be used again next year to do the same.” 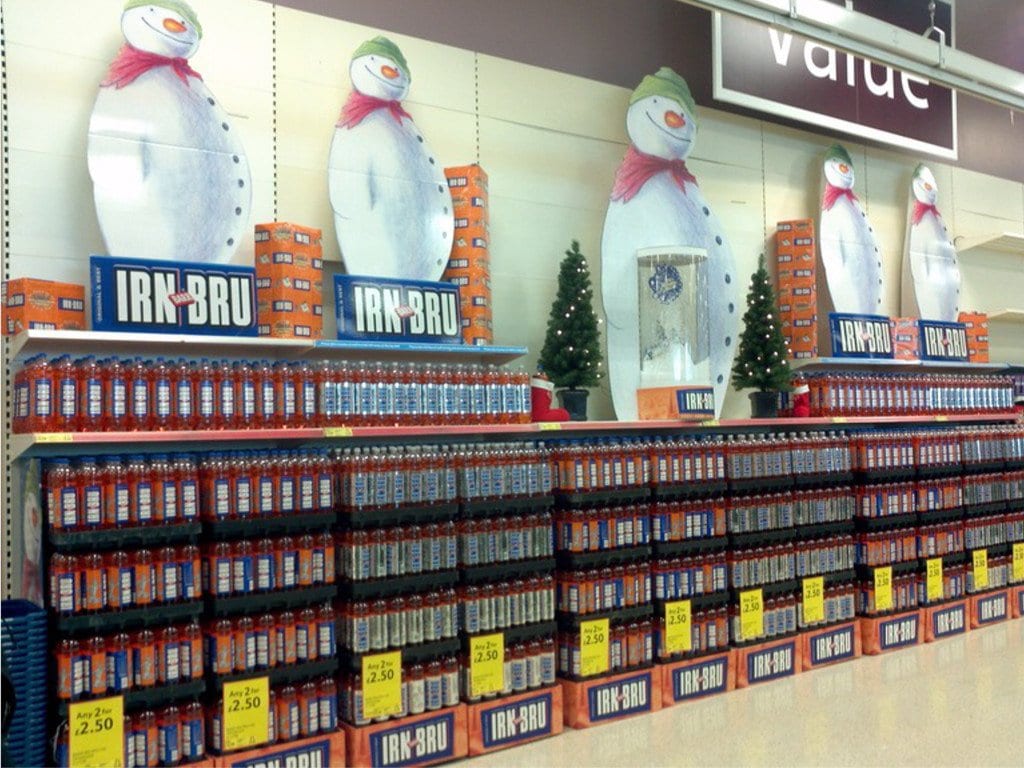