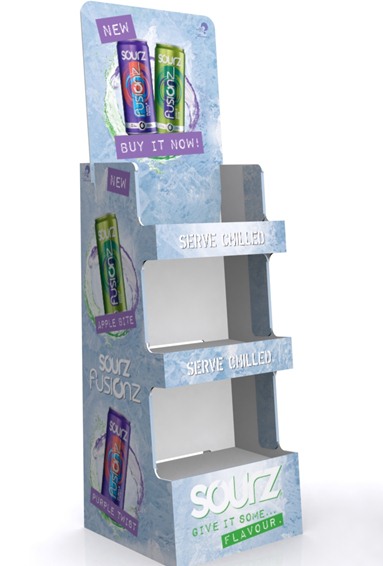 A new extension to Maxxium UK’s Sourz brand was launched in March 2012. Sourz is a category leader (the no. 1 Non Cream Liqueur brand) and Sourz Fusionz is the brand’s first ever ready-to-drink product. The development of Sourz Fusionz RTD comes in direct response to consumer demands for new tastes and flavours. The launch is part of an investment of over £10 million in the brand, and marks the kick-off of the Sourz ‘Get Sorted For…’ campaign, which will include TV adverts for for Sourz and Sourz Fusionz, high-profile media partnerships with MTV and Capital FM, a national sampling campaign, experiential activity at music festivals and bespoke trade support. Simpson Group’s part in the Sourz Fusionz launch began in December 2011 when we were briefed to provide a list of supportive POS to both promote and complement the brand’s below the line marketing campaign in-store. The Challenge Simpson Group’s challenge was to recommend, design and provide final artwork for a full range of POS materials for Sourz Fusiuonz Apple Bite and Purple Twist. The new zingy and refreshing Fusionz products would be merchandised both on and off-shelf and in fridges in leading grocery, convenience and cash and carry outlets across the country. The POS would therefore be required to be versatile and easily portable to allow distribution via Maxxium’s Brand Development Managers. 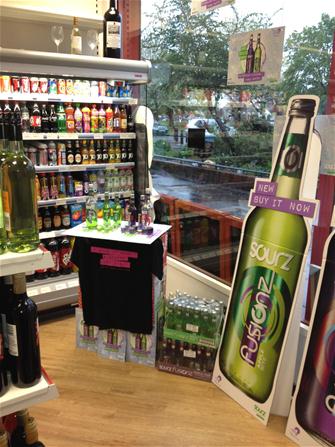 The Solution After much deliberation on the stockholding requirement for the 330ml cans, a 3 shelf FSDU with a small footprint of 355mm by 400mm was designed to hold a quantity of 72 cans. The sides of the unit were graduated to allow for clear visibility of the lower shelves. Pallet Skirts, bottle shaped standees, bus stops, hanging boards, shelf strips and open/closed door signage were identified as the key elements which would highlight and identify the products as consumers entered and navigated their way throughout the stores. Simpson Group was also commissioned with completing the artwork design for the POS. We were presented with the product artwork elements and were required to develop suitable designs for the varied dimensions of the POS materials, whilst maintaining the integrity of the brand and complementing the marketing message. We also had to colour manage and cost effectively plan production across our 3 print processes of litho, screen and digital. Working in close partnership with Maxxium on all aspects of this project accelerated both the creative and production workflow. 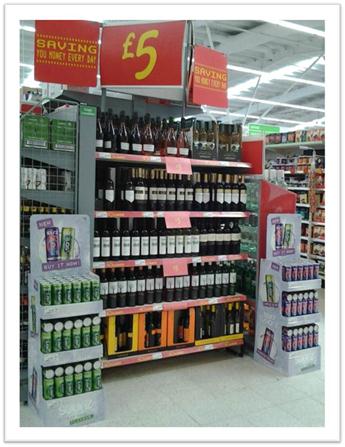 The Result The Sourz Fusionz POS packs were delivered throughout March 2012 and are now on site in key retail venues including Asda and cash and carry depots. Putting a new twist on Sourz, Fusionz is aiming to become the sparkling flavour of spring/summer 2012. So, let’s ‘get sorted for’ a colourful summer of fruity liqueurs, thanks to Sourz and Maxxium UK.

"We're thrilled to be launching our first ever RTD this year. As a category leader and the No. 1 NCL brand, we have big ambitions for Sourz, and launching Sourz Fusionz is an exciting step forward in growing our portfolio."