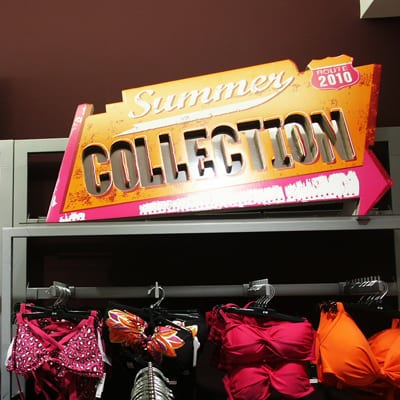 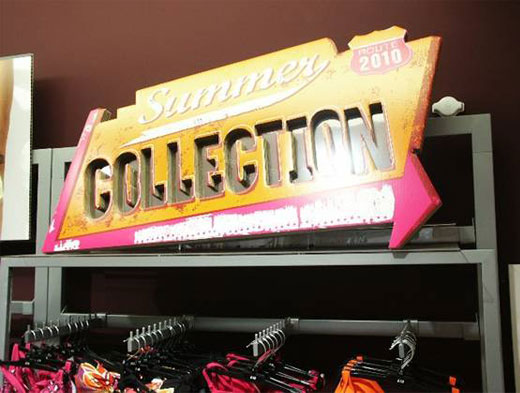 NEXT wanted to produce something a little different to highlight their Women’s Summer Collection and replicate the feel of an American Interstate hotel/motel. The Challenge The client required temporary 3d signage that would clearly illustrate the marketing message of the season. The end product was to be merchandised on shelving areas throughout the stores (below the main hanging panels). The signage and its’ message should also enhance and complement the new fashion collections and have the sense of the season. The Solution Simpson Group began by producing some initial drawings of American highway signs. Our intention was to create a directional sign which would not only indicate that this is the way for the summer clothing range but would also set the scene by creating a little in-store theatre. After several meetings with next, it was decided that an American ‘Route 66’ type theme should be the focus of the campaign. Then, after further creative concepts and full scale mock-ups, the title of the campaign was finalised as ‘Summer Collection’ on ‘Route 2010’. To pull both elements together, Simpson Group created a 3 dimensional sign with 8 layers of die cut EB Flute corrugate. The layers were glued to create depth and ‘weight’, with the individual letters of SUMMER COLLECTION affixed to a mirri board insert. Bright orange and pink were used in the graphic design which was lined to the layered boards. These combined elements added interest and light, suggesting that the hot summer sun was bouncing off the sign, reflecting the image and shining down on the clothing below. This indeed would be no ordinary highway sign. The Result From the Brief, to design, production and delivery, the Summer Collection order was processed within four weeks. Working in collaboration, next and Simpson Group created a unique design concept using temporary POP materials. In store from March 2010, the Summer Collection had arrived.