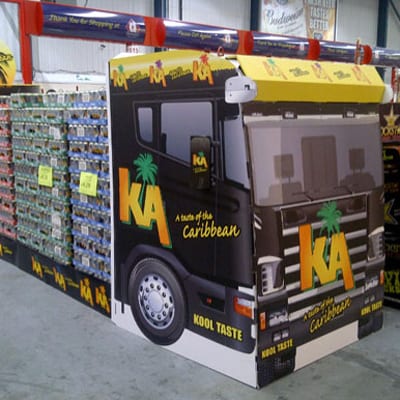 AG Barr was keen to create a dramatic statement which was in keeping with the image of the KA brand of Caribbean soft drinks but would also showcase the products, while promoting the carnival season in key Cash & Carry stores during the month of August. KA was launched in the 1960s and is based on original Jamaican soft drink recipes. The KA recipes offer an authentic taste of the Caribbean (pineapple, black grape, mango, strawberry, fruit punch, Caribbean Kola and ginger beer). For the 2011 carnival season in the London/M25 area, AG Barr has launched a new product size in a 500ml can. So, what else could enhance KA, the flavour of the Caribbean and the season of carnivals but ……. a colourful float and truck! 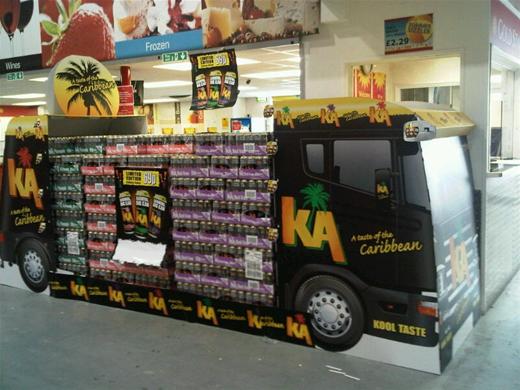 The Challenge AG Barr presented Simpson Group with the dynamic ‘KA Karnival float’ creative concept but could Simpson Group make the Caribbean dream become a reality? Was it possible to keep it cost effective, functional and easy to assemble? Our experienced 3D CAD designers approached this opportunity with zeal and welcomed the chance to create large format display materials which would enhance the products whilst being a show-stopping in-store promotion. The Solution Whilst advising of material cost savings and design tips that ensured ease of transit and in-store installation, samples were tested. On approval, production began on an internal box structure with die-cut side cladding shaped as the cab of a truck to dimensions of 1210mm wide by 1150mm long by 1740 high. The rear standee was designed at 1210mm wide by 1030mm long by 1740 high. When erected and fully merchandised there would be 2 pallets in the centre of each standee at a width of 1000mm. Constructed in EB Flute corrugate and digitally printed, the truck standee was complemented with reflective foil representing the wing mirrors of the truck and a 12m pallet skirt litho printed on 220mic pvc formed the edges of the ‘float’ which wrapped around the standard pallet displays of the KA products. 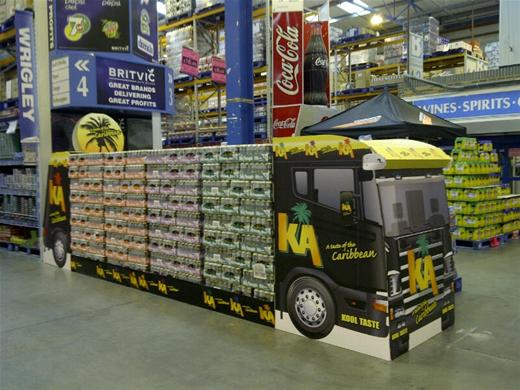 The Result Delivered in late July, our pallet skirts ‘dressed’ the products while the KA Truck took centre stage in the M25 area Cash and Carry carnival promotions.