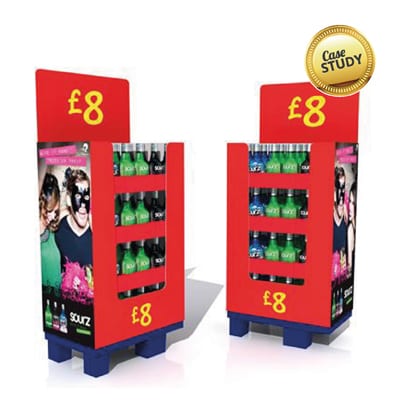 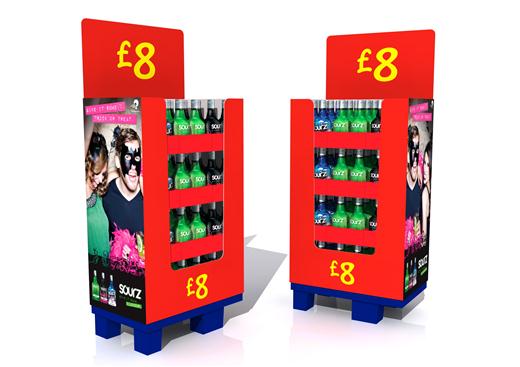 ‘Give it some Trick or Treat’ in a Halloween exclusive offer in Asda……. courtesy of Sourz and Maxxium UK. Simpson Group has worked closely with Maxxium UK throughout 2011 in the POS promotion of their many brands. Maxxium, as part of The Edrington Group and Beam Global family, has the number one whisky portfolio in the UK and also an impressive range of the world’s leading spirits brands. In September 2011 Simpson Group was commissioned to create a display unit for the Halloween promotion of one of Maxxium’s most colourful brands, Sourz. The Challenge Maxxium required a display unit for the promotion of Sourz Apple, Raspberry and the new Winter Ltd Edition in key Asda stores during October 2011. Initially the stockholding of the products was unclear so various configurations would be required to be supplied for consideration. The Solution Simpson Group’s CAD designers explored the varied design possibilities. After the sizing and testing of numerous bottle quantities, both Maxxium and Asda agreed that a Quarter Pallet Merchandising Unit would be the most suitable type of display unit. As the MU would house trays, to hold each of the three evenly split flavours of Sourz, there were 3 trays designed for each of the 4 layers of product. Fitting snuggly within the EB corrugate outer body of the Merchandising Unit, 12 trays would support the 72 bottles of Sourz perfectly and would also comply with Asda’s design guidelines. Simpson Group was also tasked with finalizing the artwork design for these display units. In keeping with Maxxium’s current TV and print marketing campaign for Sourz, the focus for the creative element was set as the party theme of Halloween. On final approval and testing by Asda, the Sourz MU was produced in EB Flute corrugate. Litho printed and mounted, the Merchandising Unit beautifully enhanced the rich colours of the products and the fabulous photography of the party atmosphere. The scene was set with ‘masked’ party goers enjoying cocktails and bottle shots of Sourz Apple, Sourz Raspberry and Sourz Winter Ltd Edition completed the scene while the marketing tagline of ‘Give it some Trick or Treat’ linked the brand to Halloween. As Simpson Group and Maxxium worked in close partnership on all aspects of this project, we accelerated both the creative and production workflow, which was particularly useful as the deadlines became very tight towards the end of the project. The Result 205 Merchandising Units were delivered flat in bulk to the co-packer for assembly and fulfillment. Large top caps were also supplied to cover 2 MUs as they were bound together for onward shipment to Asda, for in store promotion during October 2011. Promoting the fun, colourful, party themes of Sourz, Asda has the products on sale at £8 until 1 November 2011. Go on….’Give it some Trick or Treat’!