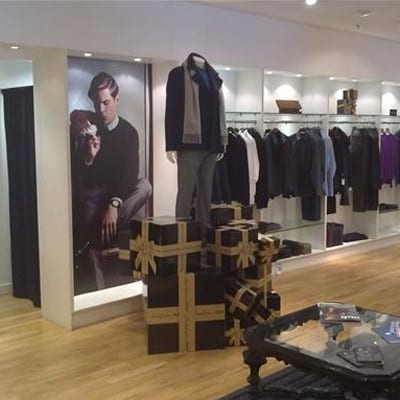 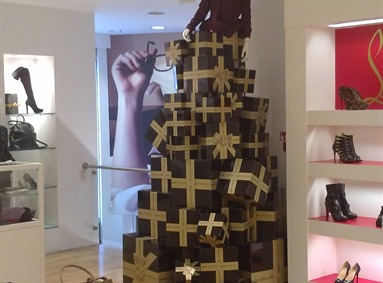 In September 2010 we received a fantastic Christmas brief from CRUISE Fashion Ltd. The Challenge CRUISE Fashion had an approved marketing concept that needed to become a reality a.s.a.p. They required the creation of free-standing displays of gift boxes, to be arranged as how they would ‘fall out of Santa’s sack of presents’. This brief would also require that male mannequins would be displayed on top of the 3ft stack of boxes while exquisitely dressed female torsos would be showcased on top of the larger 8ft and 10ft towers, as the boxes below emulated a ‘flowing skirt’. Simpson Group jumped at the chance of working on such an interesting design, but how feasible would it be? Simpson Group would be required to design three towers of gift boxes—3ft, 8ft and 10ft stacks which would have the structural strength to withstand the weight of mannequins and would also have an easy assembly in store. 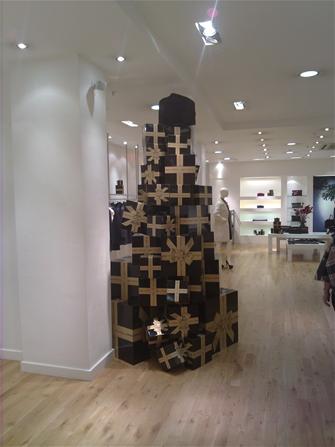 The Solution Our 3d CAD designers set about perfecting the perfect tower of gift boxes. To fit within the set 1m x 1m footprint, 4 sizes of cubes (200mm squared to 600m squared) would be required. Each cube would be strategically placed and connected to the next cube to allow the impressive towers to evolve. 1500 cubes in total would need to be produced to create just 15 tower displays. Fully assembled, the towers would be shipped in three packs with the final assembly in-store. The 3ft tower would be shipped completely assembled for ease of installation. Another 5ft stack (also assembled) would be shipped to be attached to the first stack in-store. The final 2ft stack could then be placed on top of the two others to complete the ultimate 10ft tower. These stunning displays, printed in high gloss black with gold ribbon effect and message would create the immense proportions required, but would also comply with the client’s second request for a simple installation in-store. With the well groomed mannequins and torsos in place, the gift boxes also created glamorous shelving areas for smaller products, such as handbags or hats, to be put on display. As the female torsos sit on top of the larger 8ft and 10ft ‘present’ stacks, the cascading boxes below successfully created the illusion of a woman’s flowing skirt. 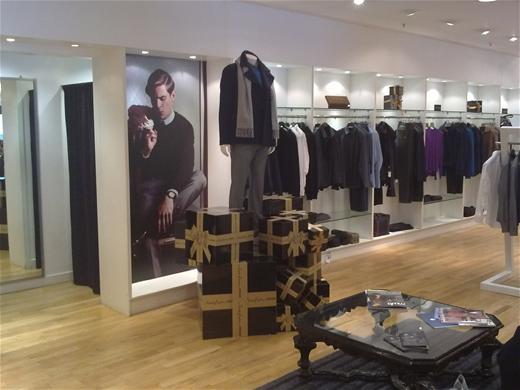 The Result Delivered to 4 Cruise stores from Newcastle to Aberdeen for installation in early November, Simpson Group were on hand to make any last minute alterations and to ensure that the dramatic display set-up went as planned. And it certainly did, the presents were ready and waiting for the Christmas 2010 shopping period. With the gift boxes all wrapped with ‘love from Cruise’, it’ll be hard not to open them until Christmas day, but it’s certainly clear that the party season is looming.