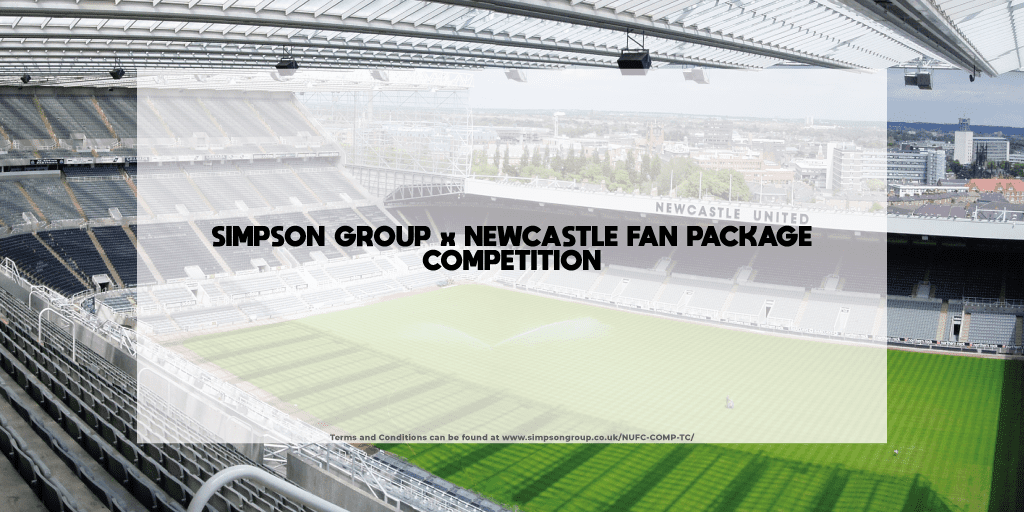 SIMPSON GROUP (registered company no. 11171309) of Simpson Group, Influence Park, Rutherford Road Washington Tyne & Wear NE37 3HX is the promoter of this free competition. Subject to these Terms and Conditions, all persons follow the rules below depending on the Social Media platform before the stipulated closing deadline (18/05/2018 5.00pm) will be entered into a free competition as set out on Competition to win the prize detailed in the Image (the “Prize”). The winner will be announced on 21/05/2018.

Twitter Rules – Entries must be made by following @SimpsonGroup on Twitter, Retweeting the ‘The Tweet” which includes the competition image ‘The Image’, using the #Simpsongroupnufc ‘The Hashtag’ and tagging a friend who they would share the prize with.

Facebook Rules – Entries must be made by liking Simpson Group on Face, Sharing the ‘The Facebook post” which includes the competition image ‘The Image’ and using the #Simpsongroupnufc ‘The Hashtag’. The entrant must tag a person they would share the prize with.

You are providing your information to the Promoter and not to Twitter, Instagram or Facebook. The information you provide will only be used for the purposes of contacting you in the event that you are drawn as a winner of the Competition.

As a participant and/or winner, you will fully release Twitter, Facebook or Instagram from any and all liability, claims, demands, and causes of action for personal injury and or damage, theft, or loss suffered in connection with this Competition or the use or acceptance of the Prize or any portion thereof whatsoever.