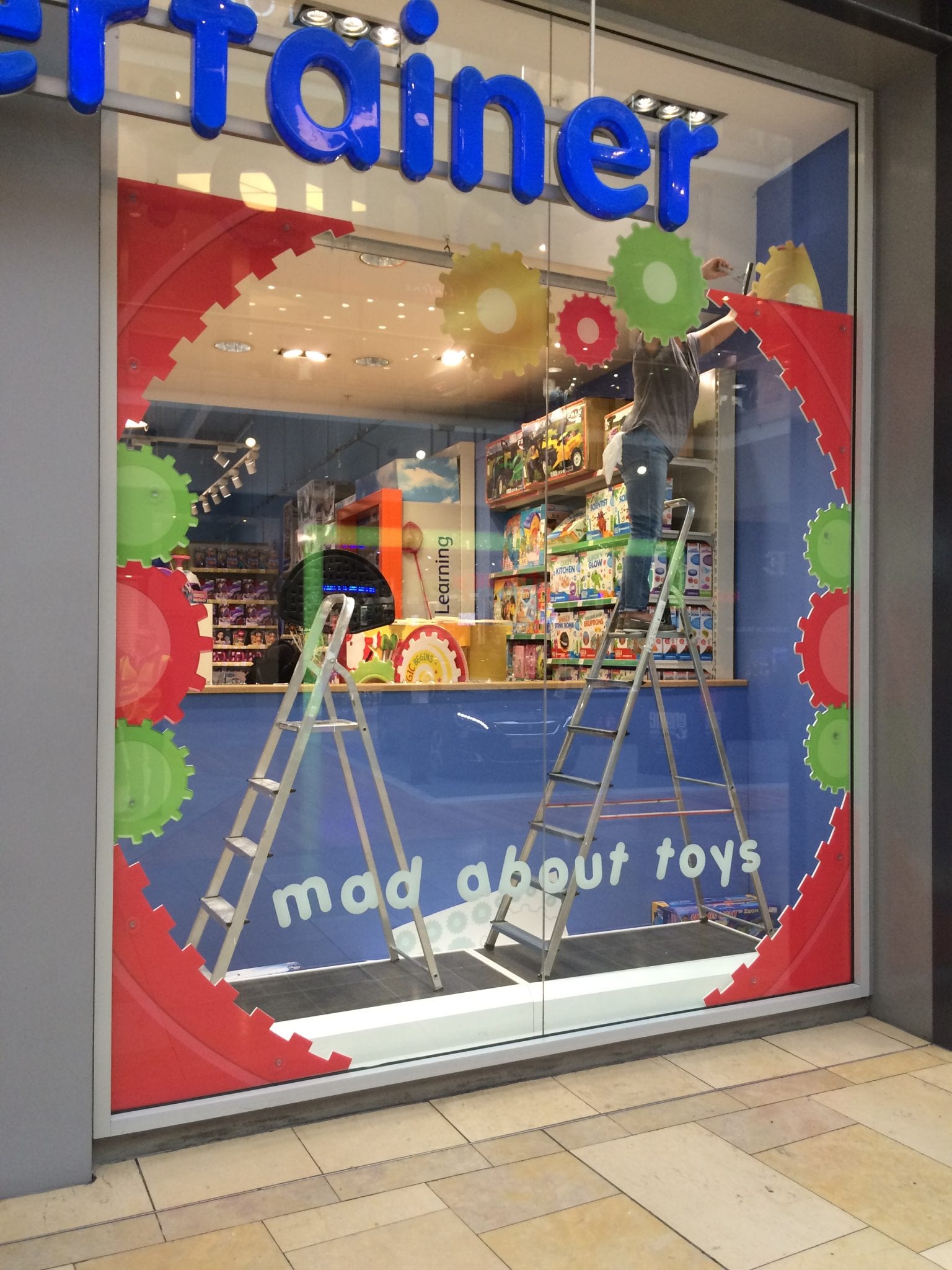 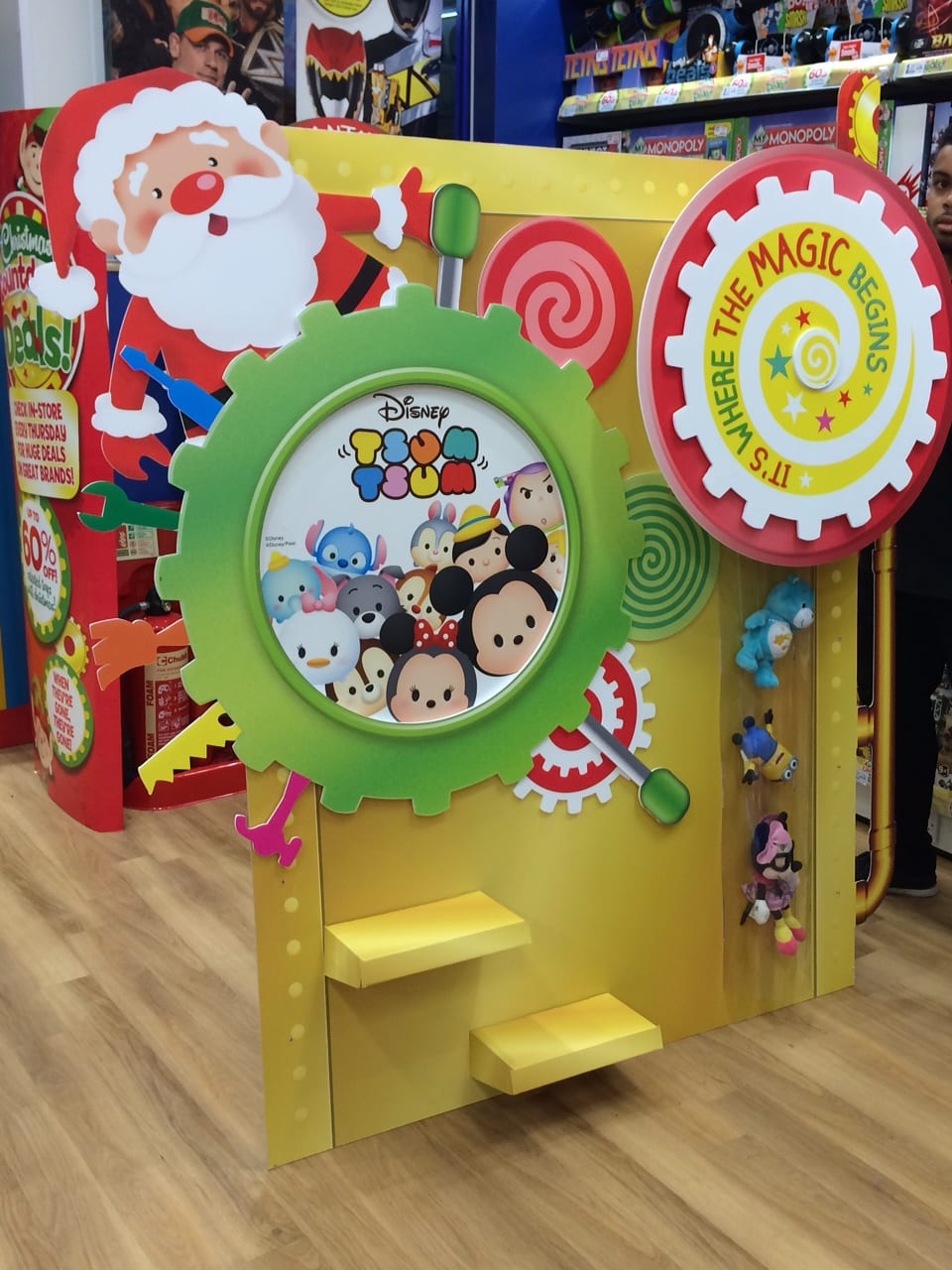 Back in March The Entertainer asked if we could come up with a new exciting Christmas 2015 window display that was bigger and better than the one produced in 2014. The display had to be strong enough to stand in the window for 5 to 6 weeks over the busiest and most competitive period of the year. The Entertainer wanted the window display to turn heads, increase footfall and subsequently increase sales whilst remaining within budget. The window display also had to be easy to assemble so that staff within store could put up the display themselves if required.

With this in mind The Entertainer were presented with our Toy Machine Santa’s Workshop idea which included four linked window options: Gold, Silver, Bronze and Tin. Each version was designed and costed meaning they could pick the version they most preferred and roll it out across their UK stores. Our CAD experts designed samples alongside their ideas in order to prompt discussion and feedback on the options available.

The Entertainer were very impressed with the options our CAD team had come up with, so much so that they decided to go with all four themes, rolling out different options across various UK stores dependent upon their window size. They decided to opt with 9 Gold windows, 14 Silver Windows, 95 Bronze Windows and 4 Tin Windows.

The Gold version was rolled out to all major flagship stores. It included a large 3D Toy Machine with moving mechanical parts, cogs, flashing lights and beacons alongside space for real product to be displayed. A clear PVC tube was attached to the front of the display to create the look of a flume. A row of cable ties were positioned during the unit build so that real toys could be placed within the tube. This gave the impression that the toys were travelling up the flume.

The moving cog gave the unit the interactive look we wanted and because the Gold and Silver windows had electrical mains it meant we didn’t have to power the unit using batteries. Small flashing lights ran parallel down both sides of the unit and a mixed selection of colours were chosen, this once again added vibrancy to the unit. The smallest of finishing touches were considered, for example the ‘o’ within the title ‘Santa’s Workshop’ was also made into a moving cog.

A conveyor belt was printed on the floor and LED lights were made and put in a chasing sequence underneath this, this again helped create the impression the toys were moving.
Podiums were also created to look like machine pistons; product could then be raised onto these to give the unit an extra dimension. The side window cogs were applied to the glass using suckers this eliminated the need for wires or strings.

Finally vinyl window cogs were designed in a mixture of sizes. These were positioned to fill in any gaps within the window display. We also created tiny versions to cover-up and hide any suckers, so they could not been seen from the outside.

All 9 Gold flagship window displays were built in-house at our Langley site. This meant they could be expertly glued and assembled by our engineers before being packed for despatch.The first flagship installation was carried out in October at the Bullring shopping centre, Birmingham. This installation was fitted by our CAD team, whilst at the same time they trained The Entertainer staff to install the remaining window POS themselves. The Silver, Bronze and Tin window displays were sent to stores fully flat-packed with assembly instructions.
The windows have been a huge success so far, it has secured the attention of the passing trade with many families stopping to have their photos taken next to the window display. We’ve also received some excellent feedback from the client (see below). We’re looking forward to seeing how the window improves footfall over Christmas.

The Simpson Group were involved with our 2015 Christmas window from the very initial concepts in March right up to installation in November. They have integrated seamlessly with our own team here, our design agency and visual merchandiser to ensure the smooth running and successful delivery of what has been our most engaging and impressive Christmas display to date. Myself and the whole team at The Entertainer couldn’t be happier with the end result and would like to thank Paul, Laurie and everyone who worked on this project for going above beyond to bring our ideas to life and for exceeding our expectations