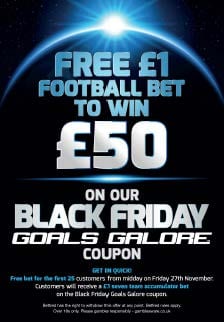 A variety of different poster artworks were printed, all promoting several different bonus boosts for a range of sporting fixtures

Betfred is one of the UK’s largest bookmakers, established in 1967 with 1,378 licensed betting offices and the latest e-Gaming business in the UK. They requested that Simpson Group produce the POS for their Black Friday Giveaway campaign. The promotion involved several different ‘bonus boots’ for a wide range of sporting fixtures kicking off with the Premier League Darts. It was a multichannel campaign with a boost being released on the hour, every hour between 12pm and 6pm on Friday – both in-store and online. Given that Black Friday is fast becoming one of the most competitive dates in any retailers calendar, the posters had to be simple yet effective in order to catch the attention of the passing trade.

A variety of different poster artworks were printed using our web2print software, all promoting several different bonus boosts for a range of sporting fixtures including ‘a free £1 football bet to win £50 for the first 25 customers from midday.’ Simpson Group then delivered the relevant posters to their entire 1,378 store estate. The cost of the overall promotional campaign was £5k. However, it returned a 5% additional increase on daily sales across Betfred’s store portfolio, which represented an overall revenue increase of £160k, demonstrating what impact a simple poster campaign can have on sales.