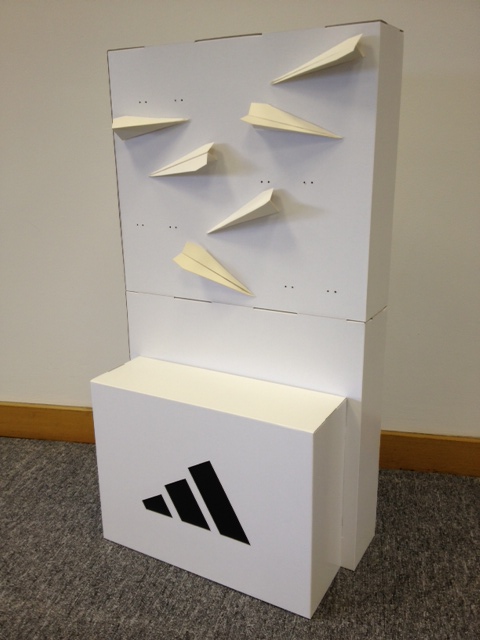 A stand-out display to showcase the Adidas Element Tricot range was required for display in Footlocker store windows. The theme of lightness or floating was suggested, to reflect the lightweight construction of the range. Also, the need for the display to be flat packed and easily constructed by Footlocker staff was expressed. 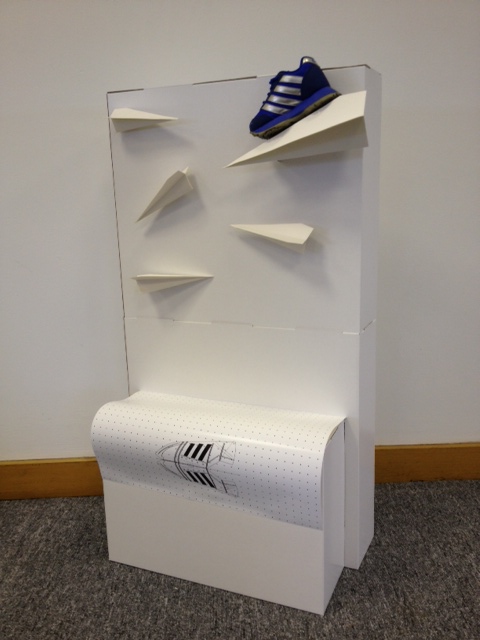 After a conference call with the client, Simpson Group landed on the idea of using a paper aeroplane to represent the theme in a striking way. These had been used in the concept imagery for the shoe designs, and carrying them forward into the display was a strong visual device that communicated the concept and science behind the product to the customer, strengthening its exclusivity and perceived value.

Continuing with the idea of allowing the end user to see a glimpse ‘behind the scenes’ of the Adidas design process, the background of the display was given the appearance of pattern cutting paper, and the design sketches of the three shoes in the range were printed on the paper planes themselves.

A well received innovation was to design the display to take advantage of its position in the store window, with black vinyl lettering applied to the actual window in front of the display – with the Adidas logo and title of the product range. Furthermore, the displays were designed to be positioned back to back, therefore create advertising space inside the store with no increase in footprint. 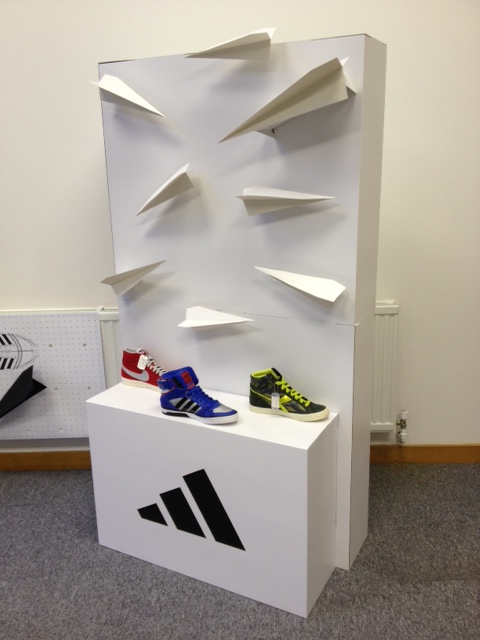 Three options of unit were mocked up, and white samples were shown to the client.

Option 2: A smarter FSDU that holds trainers on the top of its larger planes. Front podium helps support the unit and also display trainers if required. Curve added to as an alternative aesthetic option to the client.

Option 3: An FSDU with 3D Planes attached at angles on wobbler arms. This created movement to reflect the theme of lightness. The front podium was given a large Adidas logo, for maximum branded impact. Again, the podium allows a dual use of support and product display.

After receiving excellent feedback from the client, the decision to develop a fourth option (which became the finished display) was taken.

Option 4: An FSDU with increased width to make it more stable. 3D planes were attached on wobbler arms to creates movement, and the shoes sat on top of the three larger planes. More white space was left to allow an increased number advertising messages to be applied directly to the unit.

The display was designed from the ground up to be delivered flat packed and easy to assemble by shop staff. Simple slot-in construction was used, and a diagram of the finished display was provided to show which planes were to be placed where. 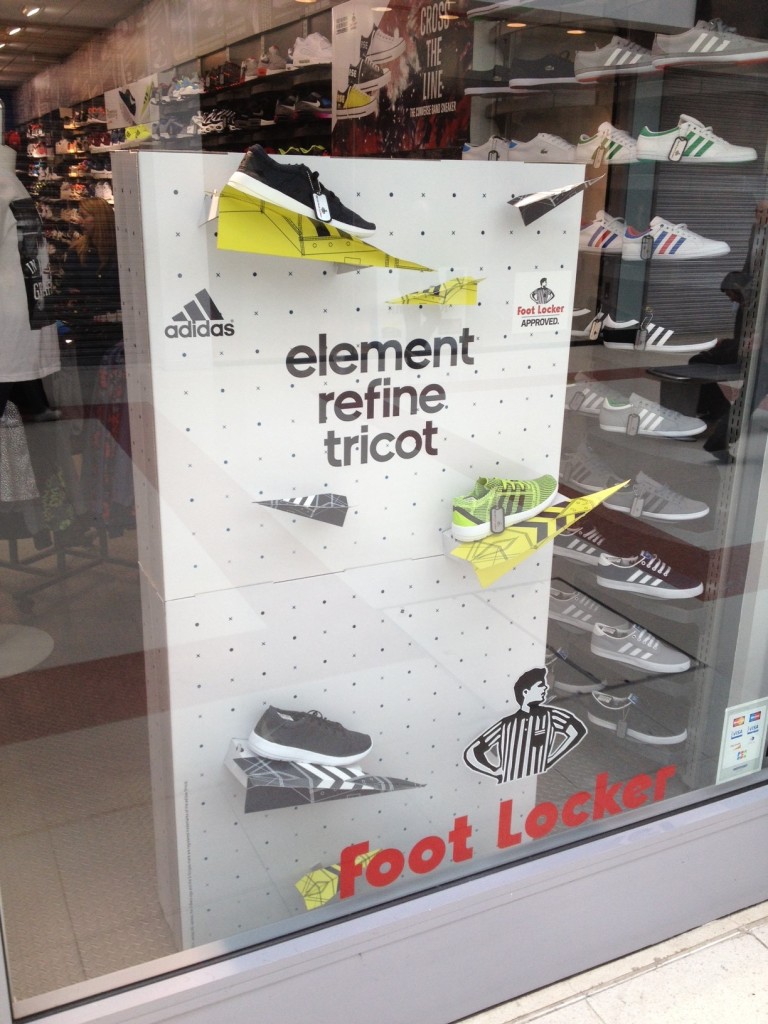 Each store received 6 displays in total, 3 to face the window and 3 to face inwards, positioned back to back. This was a successful way of reducing footprint and maximising advertising impact in a limited space.

Mark Nicholson (Associate Manager, Brand Concept) says, “The printers did a great job of bringing to life flat in-line global creative into an exciting 3D in-store execution. The design was extremely innovative particularly given the strict budgets and guidelines we have in place for POS installation and set up. The design allowed us to perfectly balance brand messaging and display the products. Overall we were extremely happy with the design & impact it had in store.”

Sri Kataram
By closing this message, you consent to our cookies on this device in accordance with our cookie policy unless you have disabled them. Find out more.