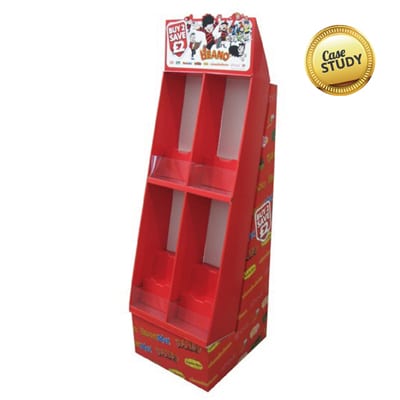 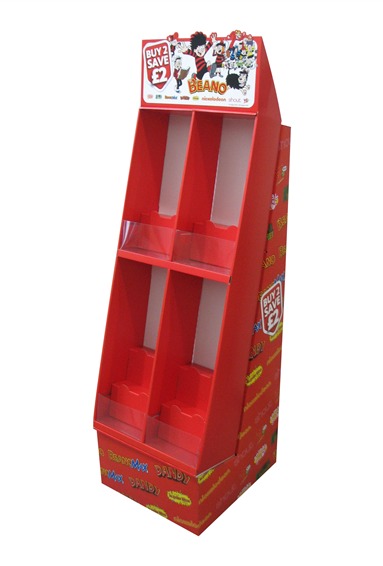 At Simpson Group we have been well entertained with the fabulous DC Thomson range of children’s comics. For animal lovers, fans of SpongeBob and Nickelodeon characters, girls mags, Jacqueline Wilson stories, WWE and classic comic characters check out Morrisons for ‘Buy 2 Save £2’. The Challenge Morrisons offered DC Thomson the chance to place a temporary FSDU in 300 of their largest stores which would feature a children’s summer offer for the complete month of August DC Thomson then approached Simpson Group with the brief: ‘Design a colourful, eye catching FSDU which would attract the younger consumer and reflect the vibrancy of the comics on display. The FSDU should also have sufficient space to display 10 titles, sitting at two main levels.’ The titles that were to be involved were: Animals & You Animal Planet Beano BeanoMax Dandy Jacqueline Wilson Nickelodeon Shout WWE Kids The Solution The focus was quite naturally to be on the products and so the POS had to be uncomplicated. It was the combined aim of Simpson Group and DC Thomson to promote the merchandise and to attract the consumer in the simplest manner possible, to allow the product range to stand out from the crowd. With the display unit being required to hold 10 comic titles over two levels, our CAD designers determined that the best fit would be a base level with 3 tiers and an upper level with 2 tiers. Two comic titles would be merchandised on each tier. Dimensions would then be determined by what was necessary to make the FSDU stable. It also had to be transported with ease and have a simple in-store assembly for the DC Thomson merchandising team. Once samples were tested and approved by DC Thomson and Morrisons, the unit was then produced on FE corrugate at 470mm wide by 540mm deep by 1600mm high, with pvc pockets creating shelf fronts and extra protection for the products. The graphics were kept simple with product logos, reflecting the colourful excitement of the comics, wrapping around the display unit to make the message visible from all angles. A die-cut header, designed in the image of the infamous Dennis the Menace, became the crowning glory to the FSDU. The Result FSDUs were delivered direct to store on 1st August for installation by the DC Thomson merchandising team. The FSDUs create off-shelf merchandising space and clear signage for product location, which helped to push those impulse purchases during the month of August. Kids of all ages, why don’t you pick up a copy or two of your favourite comic and save £2 courtesy of DC Thomson.