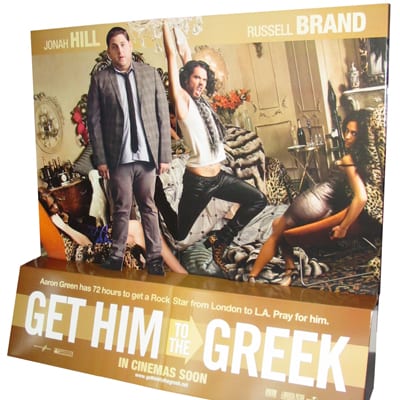 Creative Partnership – ‘Get Him to the Greek’ Standee

23 Oct
Creative Partnership – ‘Get Him to the Greek’ Standee 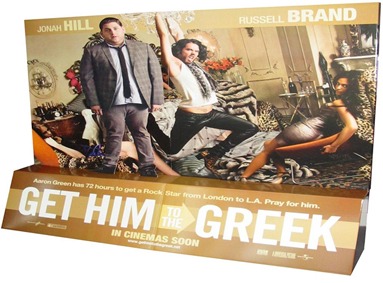 Grab the popcorn - Simpson Group is off to the movies! In March 2010, we were delighted to receive our first order from the Creative Partnership, (on behalf of Universal Pictures International) the people who make award winning campaigns for the entertainment industry. The Challenge Our brief was to design and produce a large format 3d standee which would be displayed in cinemas across the UK and overseas, prior to the release of the Universal Pictures movie ‘Get Him to the Greek’ from late June 2010. Simpson Group’s standee would be required to encapsulate and promote the essence of Get Him to the Greek. Our standee would therefore need to be pictorial, functional and have an easy assembly. The Solution Our standee would include three elements (base, display figure and rear panel) which were to be constructed in 5 sections, in order to create the immense dimensions that were required. A half size mock-up was provided for the client, with the budget costing for distribution in 3 languages. On approval of our design and cost conscious quotation, Simpson Group moved on to the full production of the 3111mm wide by 1754mm tall standee. The Result 1,244 Standees over 3 languages and print variations were produced, carefully packed and delivered. Simpson Group is proud of their role in assisting Creative Partnership in the design and execution of this marketing campaign on behalf of Universal Pictures. Job done! Now we can all relax and enjoy the movie.